There are quite a few different ways to reach the summit of Mount Kilimanjaro, and not surprisingly some are far more popular than others. It’s a good idea to choose your route early in the planning stages since it will impact the cost and duration of your climb. Once you’ve considered which route appeals to you most you can contact tour operators to find out about prices and specifics, but you don’t really want to compare the price of one operator’s 5-day climb on one route against another’s 7-day climb on a different route. They each have their quirks so compare apples to apples. 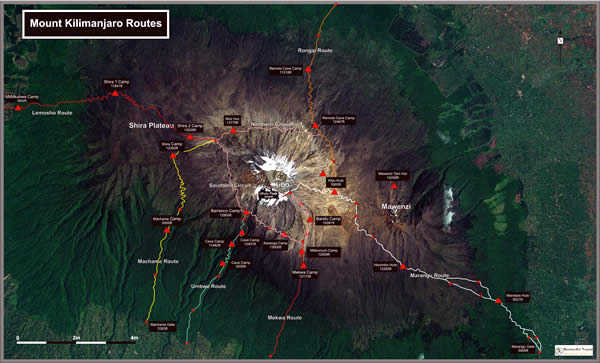 There are 7 or 8 different routes that people use each year, but two in particular are more popular than all the others put together. Below you’ll see details on the five main routes with brief summaries, and much more detail is available by clicking the link beneath each summary.

This climb is usually done in either 5 or 6 days and most experienced outfitters try to discourage people from this route, in spite of its popularity. It’s commonly called the Coca Cola Route because each night is spent in a camp of permanent huts where snacks are available for purchase. The climb itself isn’t too difficult at first, but it gets complicated on summit day when the sudden rise in altitude catches up with many people. The scenery is not as dramatic as some of the others, and the higher percentage of poorly-prepared climbers and less-experienced guides leaves the Marangu Route with the lowest success rate for reaching the summit.

more information on the Marangu Route

This climb can be done in either 6, 7 or 8 days, and similar to all the others except Marangu, climbers sleep in tents each night instead of huts. This is by far the most popular route recommended by experienced outfitters and those wanting to increase their chances of reaching the summit. Altitude is gained earlier on the climb, which gives climbers more chance to acclimate before the grueling summit day.

more information on the Machame Route

This climb is the least-used of the main ones due to its remote starting location north of Kilimanjaro. It’s normally done in 6 days starting through some heavily-wooded areas, and the final two days are the same as the Marangu Route. You might have to look around for operators who will book the Rongai Route, but it can be done if you are determined.

more information on the Rongai Route

You might see discussions of the Mweka Route when researching Kilimanjaro. The Machame and Lemosho Routes typically descend on the Mweka Route because it’s the quickest way down and there is little point in retracing all your steps down the greater distances of Machame or Lemosho. It’s not commonly used to ascend.

Is Kilimanjaro An Ant Trail?