This route is seldom used due to the fact that the trailhead is very remote and difficult to reach. It begins north of Kilimanjaro in a heavily wooded area near the Kenyan border. This route normally takes 6 days and is relatively easy compared to some of the others, but of course none of the Kilimanjaro routes is truly easy.

The main appeal of the Rongai Route is the sensation of unspoiled wilderness climbers feel for the first 4 days, which is a stark contrast from the popular Marangu Route and its mountain huts and snack stands at every camp.

The Main problem with Rongai is that it is visually quite uninteresting and focused on a section of the Kilimanjaro Forest that is severely impacted by deforestation and exotic tree plantations, so although it is remote, it is also not by any means the most attractive trail, besides which it intersects with Marangu so the illusion of isolation is brief.

Day 4 of Rongai ends at Kibo Hut, where it intersects with Marangu Route for its final two days. Day 5 of Rongai is the long and brutal summit day, which begins at midnight of Day 4 after only about 4 hours sleep. After reaching the Uhuru Summit in mid morning on Day 5, Rongai climbers descend on Marangu Route so the final night on the mountain is spent at the often-crowded Horombu Hut complex. 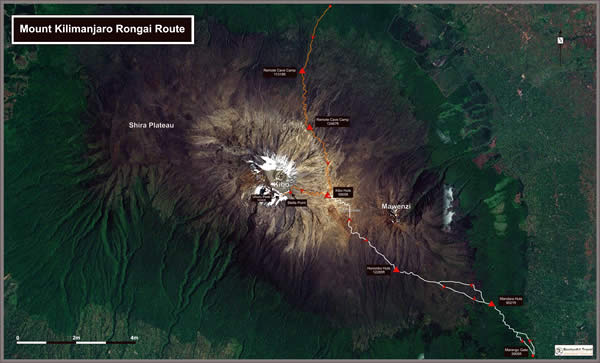