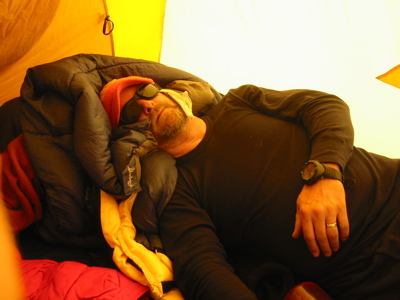 “I’d been awake most of the night, struggling for breath in the meager air “
Jon Krakauer from “Into Thin Air”

No, this isn’t the newest diet fad or a way to stop someone from choking.

This is the name given to the process of running short of oxygen and being jolted awake by the horrible feeling of suffocation while attempting to sleep at significant altitude. Both my son and I experienced this potential altitude effect while cocooned in our minus-20 rated bags during our memorable night at Crater Camp (18,800ft), before our summit of Kilimanjaro the following morning.

“Sleeping is a problem for most high-altitude climbers due to a phenomenon known as Cheyne-Stokes breathing. While dozing, the climber breathes normally for a minute and then stops completely for thirty seconds. Suddenly, breathing resumes at an accelerated rate. One minute you sound out of breath, the next, dead. It is often more disconcerting for the tent mate than the sleeper.”
John Roskelley from “Nanda Devi, the tragic expedition.”

Please understand this missive is for edification not condemnation because I was the flatlander who had chosen to climb the Western Breach and camp just under the summit. I was the flatlander who thought doing an overnight at 18,800 ft. would be the experience of a lifetime. And I’m the one who wouldn’t trade that sleepless night with my son for anything in the world.

We discovered this phenomenon while attempting a nap before dinner. We had been up, in the predawn chill, climbing to minimize the risk of rock falls on the Breach (the very thing that ultimately closed the route in January of 2006). We had scaled it in just under 5 hours and spent 2 hours exploring the Reusch Crater, the surrounding cinder cones and the mythical iconic glaciers. As we arrived at our moonlike camp nestled between the Furtwrangler Glacier and the foot of the 1000ft summit ridge, our head Tusker guide simply said, “The UV is intense up here, you should stay out of the sun before dinner”. Our oxygen starved brains went “OK” without thought and we lumbered into our much loved, two man Eureka Scorpion tent. We had been on the mountain 9 days to this point and were tired by default. Naps were easy to accomplish. As I recall however, I was the first one to grope to a sitting position gasping for breath but with 50% less oxygen in the air, I have little memory of how we spent the time before dinner or what was said. I don’t even remember dinner.

As night fell we were warm and cozy in our bags but deep sleep again forced our gasps for breath needing 2 to 3 desperate inhalations to regain our oxygen balance.

For whatever reason, (I’ll blame the altitude), I waited until midnight to get up and tell our head guide we were having trouble breathing. He dutifully got up and came to our tent with the pulse oximeters and some oxygen. The oximeters measure blood oxygen content and my numbers were “normal” for 18,800ft. He gave me some O2 but I could breathe just fine while awake and it had no effect. If he would have let me sleep with it I probably could have, but there was only one bottle and one mask. There was no way I would have considered using it if my son couldn’t have the same so I didn’t even ask.

It was then I remembered the dozens of mountaineering books I have read and all the references to, “sleep was out of the question” and “another sleepless night” comments. I looked at my son and said, “Welcome to altitude buddy, what do you want to talk about until morning?”

There was an abundance of quality material to solicit from each other; we’d ascended past a dead climber being dragged down the Breach Route in a tarp earlier in the day, we knew we would summit “easily” (compared to the Western Breach) in an hour when the sun came up and we’d be at 12,500 ft. the next night, we were two nights from our coveted first shower in 11 days and we knew hunger would return so we made lists of all the foods we were going to eat…and lots more.

The gift that was rendered from our sleepless canvass that night wasn’t so much what we said or the stunning beauties of the moon lit cerulean blue glaciers or by stars close enough to pluck from the sky with your finger or even our location on top of Kilimanjaro, the roof of Africa. The true essence of the experience we shared was the opportunity a father and son were given to fight a common foe. No doubt climbing the mountain together was a big part of it but that night keeping each other company and awake, was the exclamation point. I don’t know how many times we clamored, “Can you believe we are on top of Kilimanjaro?”

Since that night forward our good father/son connection became an indestructible bond which has never let our relationship suffer. This would never have happened with such conviction had we been able to sleep.

In all the accounts I’d read while researching our trip everyone seamed to be able to sleep just fine at Crater Camp. The night before at Arrow Glacier Camp we slept without issue at 16,000 ft. so I can’t really say why 2,800 ft made such a difference, but it is, indeed, over a half mile higher into to rarified air.

I still recommend the Crater Camp strategy to anyone who asks because so few take that opportunity (less that 5% of the annual trekkers choose this option) to experience its unique topography and stunning beauty. Summit day starts with an hour pitch up to the top, not an 8-hour slog through the night and standing next to the “Snows of Kilimanjaro” may not be available after 2015 or at least that’s what the “experts” say.

My research never identified Cheyne-Stokes as an issue on Kilimanjaro so I will postulate that we were some of the very few to experience it but my son and I carried priceless equity from our sleepless endeavor none the less.

As expected, when we settled in at our last camp our hunger returned and our trouble sleeping the night before was forgotten. After our exceptionally delicious celebration dinner we slipped into our bags as the sanguine glow of dusk receded and slept like two guys that had just climbed a 19,340-ft mountain.

It is fun to watch the jaws drop on the folks I share this story with now. Most of course, would never dream of climbing Kilimanjaro much less camping at 18,800-ft. When they understand I’d been there however, the first question is always, “What’s it like up there?” Before I answer, I take a breath.