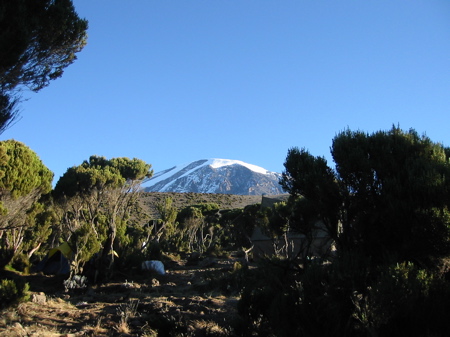 It took five days to ascend the distance we now covered in five hours.
Much of our descent was running down the scree slide and it did not take long for us to appreciate the increase in oxygen.

Millennium is an hour or so further down the mountain from Mweka camp and looked to me like it was less crowded. Nestled into the edges of the rain forest, we found the addition of green and the smell of Cedar almost a re-birth.

We were reunited with our complete team as only half of them went above Lava Tower with us. They all knew we had made it to the summit and we were surrounded by high-fives and smiles.

Emotions were totally different than our first camp feelings. We were relaxed, felt an increasing glow of accomplishment and were truly hungry for the first time in seven days. We also knew sleep would be magnificent and the wonderful shower was less than 24 hours away. We did, however, meet our first of many trekkers that did not summit. The disappointment in some of there folks was profound so we measured our elation carefully.

Our cook created a meal from all our favorite items during the trek and we were in our bags and blissfully asleep by 7:00pm.

The picture above was the last glimpse of Kilimanjaro’s summit before we were swallowed up by the rain forest. We knew we’d accomplished something very special but saddened by the end of all the dreams and planning. Wondering what could possibly top this.

After about four hours of descent, we received our summit certificates at the Mweka Ranger Station, and then hopped onto the Land Rover for the ride back to the hotel feeling every bit the successful trekkers.