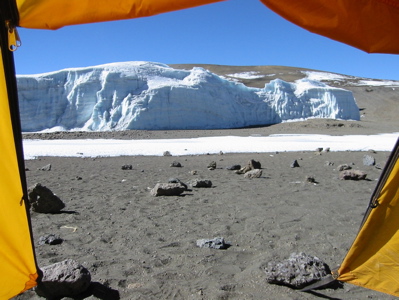 Getting to the crater ascending the Western Breach with my son will remain as awesome a task as I have ever completed. The Breach is closed now but there are some outfitters that will guide you to Crater Camp climbing during the day from Barafu camp. Anyway you get there is well worth the experience.

As a flatlander and student of climbing history, I had to experience camping at 18, 370 ft. Peering from our tent at the frozen glaciers can hardly be put into words but seeing them illuminated in the moon light crowned by thousands of stars has to be experienced to be understood.

UV exposure is intense at this altitude and after our wonderful walkabout exploring the Reusch Crater and the Furtwangler Glacier, our guides again suggested we stay in the tent before dinner. We had been up before dawn to minimize the danger of rock fall as we scaled the Breach so a little nap seemed like a good thing. Our flatlander physiology, however, did not allow adequate acclimatization to enable deep sleep for neither my son nor I but many other accounts I had read while researching our trip reported blissful rest.

I took this restful but sleepless opportunity to talk with my 17 year old all night.
Our discussions were of life, food and adventure, but we had one serious subject to resolve. As we began our ascent of the Breach we were confronted with the knowledge we would have to climb past a dead man who had suffered a heart attack and fallen to his death trying to climb the route at night (The chances of seeing a dead climber are very rare indeed). All we could do at the time was steel our resolve and commit to sort out our feelings when we arrived on top. I’d always had a good rapport with my son but as dawn appeared at the door of our double-walled cocoon we were changed people, our relationship has never suffered since.

Summit morning was a chilling 7 degrees and the reason we had carried goose- down jackets and wind-proofs. Our dinning tent kept us out of the wind as we hurriedly gobbled our porridge and were away. The route from Crater Camp is a simple hour-plus ascent to the coveted sign and the priceless photo (no 6 to 8 hour slog in the dark from Barafu or Kibo Huts). Then down you go like everyone else.