A Challenge on the Mountain 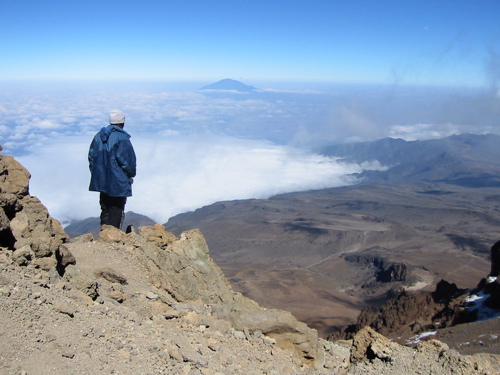 My son and I climbed Kilimanjaro by the Lemosho/Western Breach route. It remains the most daunting and cherished adventure we have ever completed.

Being a guest blogger on this site has given me the opportunity to share our experiences. My mission has been to hopefully inspire, educate and entertain.

The following account comes under a very different category but happened on our trek, nonetheless. Please remember this was all happening at 17,000+ ft., which limits cognitive and emotional flow to that of a dribbling faucet. I’ve been asked to share this because of its rareness.

The greatest challenge we faced was not headaches, fatigue, altitude sickness or weather issues. It was the cluster bomb of emotion thrust upon us the morning we discovered we were going to have to climb the Western Breach past a dead man being removed from the route above us. The same route we had just spent the last 8 days preparing to climb.

A group of six South Africans had attempted the Western Breach the night before our day climb. We’d seen their headlamps above us in the moonlit night during our trips out of the tent as they twinkled in a mesmerizing serpentine pattern. As we began our assent in the morning, we were surprised to see three of them coming down. (The Breach is an up route. I have no idea how they down climbed some of the areas or where they spent the night). All one said was “farewell”. By his demeanor and delivery I knew something serious had happened. I figured they either got scared, injured or sick but it was only moments before I understood his meaning. Next, two of the ladies came along and told us they lost a companion to a suspected heart failure and subsequent fall.

As horrible as this was for the South Africans, Nathan and I faced a completely different reality. This meant we would have to pass the porters bringing this fellow down and the potential of diluting our resolve and spiking our adrenalin with additional fear. So goes the psyche of the mountaineer.

I had discovered the probabilities during my trip research. Like any city of this population size, 5 to 15 people die each year out of 30,000 that attempt Kilimanjaro, heart attacks and AMS mostly. 60% of all the attempts make it to the summit. Statistically, this is not a dangerous place. We knew we could possibly confront some fear of heights issues but danger was not our game. With all due respect to the South Africans and their devastating outcome, I read opinions that even those few deaths could be prevented by preparation, safety and pace. The positive statistics, however, did not prevent me from a wave of horror as I felt I might have put my son at risk. It was milliseconds and had no dialog, just a feeling of dread but I saw myself standing before my wife explaining why I wasn’t bringing Nathan home. We stood there being pelted with a staccato of emotions and no real ability to process any of it properly. Ultimately, our guides, being prepared and concentration won the day.

I told Nate, “That’s life. This happens on mountains.” With our emotions already anesthetized by altitude, there was absolutely nothing we could do for these folks other than the squeeze of an arm and to offer hollow condolences. Nathan and I agreed to stay focused on our task and sort out our feelings when we arrived on the top. Quitting was never discussed. We had no other choice; this was to be our most difficult pitch, the pitch that claimed the life of a climber the previous night. There was no time or oxygen for extracurricular emotion or distraction.

We defaulted to our training…steps, breathing and following our trusted guides. Stephen and Yusto had become friends and they exuded confidence. We simply took our places between them and started climbing.

I will admit I kept glancing up to see where we would encounter the evacuation team. I had no idea how we would react. Thankfully, Steven moved ahead and impressively took control of the situation as we passed the porters to help minimize our exposure to the dead climber laying on the trail. He was wrapped in a tarp. Steven covered his face so we couldn’t see it and seemed very annoyed with the porters. All I saw was his feet and left wrist. His watch had been removed. We never broke cadence and were 150 yards above them when we took a break.

The view from our resting place (photo above) perched on the flanks of the Breach was magnificent but, at the time, we struggled to appreciate it. I felt relief even though we still had the scrambling sections of the Breach Route above us, waiting.

We had a couple from Montreal slightly ahead of us and my son tells me the lady was crying for the remainder of our ascent. We passed them at our lunch break and I have no memory of her distress beyond the lunch spot. I do remember giving her a hug when they joined us on top of the crater and her companion asking me to photograph him with the summit ridge behind. I believe their climb was over and they took away very different emotions and memories from the mountain than my son and I did.

We were treated to a complete reaffirmation of life. I’d never felt so alive, total elation fueled by the challenges of the Breach, the knowledge we would summit with ease the next morning and surviving the emotional pounding we had endured.

In retrospect, I would not change any of our experiences, the chances of passing a dead climber or dying while on the routes of Kilimanjaro is very remote, indeed, but as current events tell, loss of life on mountains is a stark reality even with experience and at lower altitudes. I didn’t go to Kilimanjaro to risk my life or the life on my son even in the face of our signatures on evacuation insurance documents. We all know driving to the airport is the most dangerous part of any journey. Still, as we faced this situation and the climb together, our already positive bond became an unspoken connection that has never allowed our relationship to suffer since and we left the mountain, changed men.

The truth is anyone that climbs that high is at some risk but passing a stress test, getting a Doctor exam and picking an outfitter that monitored our health went a long way to subjugate our percentages.

The question that remains then is always why risk at all?

That is for each of us to answer ourselves but I will leave you with a quote by Aleister Crowley upon his return from an attempt on K2 in the early 1900’s. I never really understood these words until I to had “done it myself”.

“I meant to tell mankind about a new state about which I could tell little or nothing, to teach them to tread a long and lonely path which might or might not lead thither, to bid them dare encounter all possible perils of nature unknown, to abandon all their settled manners of living and cut themselves off from their past and their environment, and to attempt a quixotic adventure with no resources beyond their native strength and sagacity. I had done it myself and found not only that the pearl of great price was worth far more than I possessed, but also that the very peril and privations of the quest were themselves my dearest memories. I was certain of this at least: that nothing in the world except this would be worth doing.”