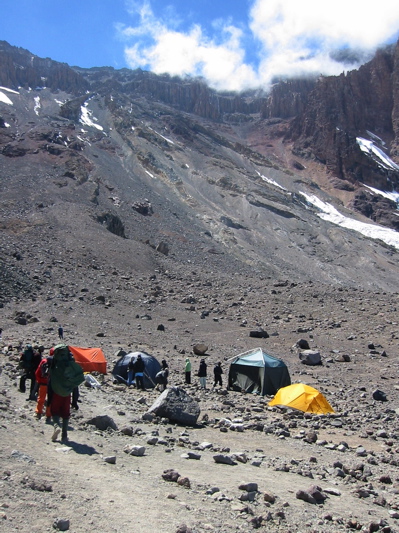 When the Western Breach was open only 5% of the annual trekkers used this route and camp. Closed in January 06, I recon very few souls will ever see it again.

Situated on the flanks of a gigantic debris field at the foot of the Breach, This camp, like no others we visited, had a transient and nomadic feel to it.

After less than two hours journey from Lava Tower, we dropped our gear and followed our guide, Stephen, up about one third of the Breach to continue our acclimatization process. Returning to our tent Stephen says, “Just rest before dinner”. The suggestion sounds simple enough but my son and I looked at each other with blank stares wondering what to do next. 16,000 ft of altitude had taken away our ability to construct a two word sentence. We don’t, to this day, remember if we slept or not. What sticks in our memory, however, is the constant rifle-crack sound of the rocks falling down the cliffs that surround the site. I do know that after dinner I watched the sunset glow recede from the Breach and felt we were going to make it.

The next morning we would leave in pre-dawn darkness to minimize our exposure to rock-fall. It was the only time in my life I had awoke with that particular combination of trepidation and anticipation.

Stephen said with a smile in Swahili, “Pole – pole” (Slowly, slowly), and up we went, step after step, breath after breath, to the roof of Africa.