Myths and magic of the Western Breach 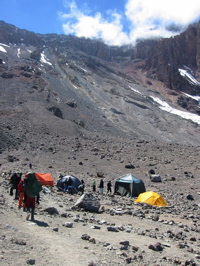 When I was doing research for my own trip in 04’, I read many different facts and myths about the “Breach”. “Only attempt if you are not afraid of heights”, “Choosing a good experienced outfitter a must”, Cannot be down climbed…an up route only”, “Exposure to drops of 2000 feet”, “Difficult but non-technical”, “Only 5% of the climbers use this route”. All the routes up the mountain can be negotiated without technical skills, even on the Western Breach. This particular track also offered a day climb to the crater plateau complete with a walkabout around the glaciers, an outstanding view of the Reusch Crater, camping at 18,800 feet and a true traverse of the mountain (going up one side and down the other). In addition, the remoteness and the potential challenge of the route (especially to the Cheeseheads from flatland, i.e. my son and I) all contributed to our decision to climb that way.

We followed the Lemosho Glades Trail and our Tusker guides had us rock scramble above Shira 1 and Moir Camps as well as the 300 ft. ascent up Lava Tower as preparation for the Breach climb. I also chose to add the two acclimation days available to maximize our chances for success.

The research, myth, practice scrambles and the ability to see the Breach waiting for us as we approached all combined to create what I will call a thunderous anticipation.

By the time we arrived at Arrow Glacier Camp (17,000 ft.) we were acclimatized, confident from the scrambles we’d accomplished and not a little impatient to get it done. I stood outside my tent at dusk staring up at the Breach and knew we would succeed but it was the fear of the unknown that made us feel so alive that night. Both my son and I have found it impossible to remember if we slept or not.

We shuffled to the mess tent in the early morning both saying, “FINALLY” Our guides had prepared us well as the rhythm, our rest stepping and deep breaths began to carry us up the serpentine path. The four areas of rock scrambling were new experiences for the flatlanders but were straight forward and exhilarating. During breaks were treated to spectacular views of Arrow Camp, Lava Tower and the Shira Plateau 25 miles away outlined by an 11,000 ft. cloud later. The feeling we experienced as we stepped on top and saw the glaciers can only be described as a reaffirmation of life.

I have no doubt that the trekkers on the Barafu or Kibo Huts night climbs experience anticipation and exhilaration as well but I consider it a shame that because the route is closed now, no other adventurers will be able to measure themselves against the unique qualities and myths of the Western Breach.

(Please read the “Nothing but Sky” story on this website for the complete account of this authors’ climb).