Search & Rescue sits probably among the top three principal concerns that every climber has when they start to ponder an expedition to any of the world’s big mountains, and even many of the smaller ones. This concern becomes particularly acute when planning a trip to somewhere like Kilimanjaro, and this thanks mainly to the inescapable fact that developing world standards can never be wholly relied upon. Even bringing to bear criticism is a bit of a minefield, and the best efforts of any individual operator are bound to some degree to be premised on the permission and facilitation of the local governing authority.

The One Wheeled Gurney

On the whole TANAPA (Tanzanian National Parks Authority) has a good reputation in matters of high altitude rescue. It could be said that they are guilty of massaging the actual numbers of incidences that occur, but that is not in any way unique, since some spectacular examples of this exist elsewhere on the continent too. Perhaps most notably this is so with the numbers of people annually dispatched on the crazy roller coaster of Zambezi white water rafting, and again on the Zambezi with regards to the extraordinarily close to nature canoe trips down the length of the wild lower section of the river. 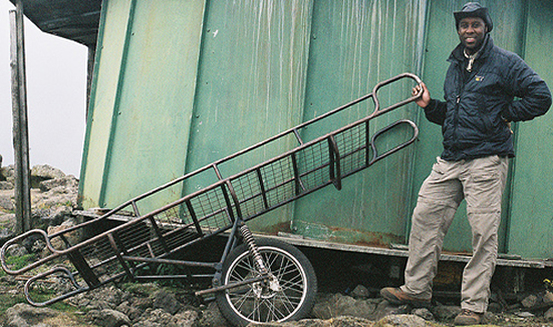 If you are on a cheap trip up the mountain, and you are feeling dizzy, or if your head is exploding and your lungs are gradually filling with fluid, then the odds are that you will be escorted back to base by a porter. If you collapse and are incapacitated a cell phone alert will probably bring up the famous one-wheeled gurney with its sole accommodation to comfort being a motorcycle suspension system. Upon this you will ride home, and no doubt feel much better when you get there. If, on the other hand, your problem is of a deeply serious nature, such as a spinal or head injury, then your hope will be that a helicopter is locally available to lift you off the mountain.

There is a lot of gimmickry surrounding safety on Kilimanjaro that ought sometimes to be taken with a pinch of salt. Quite a few of the real superchargers among the climbing outfitters, and they know who they are, place extraordinary emphasis on their safety procedures when the bottom line is first aid and evacuation, and that responsibility rests almost entirely with the local guides, TANAPA personnel and the trusty one-wheeled gurney.

In writing this piece I am bracing myself for a gale of acrimonious response from reputable operators justifiably proud of their gadgetry and their safety record. I say bring it on. Lets hear from top to bottom how the Kilimanjaro evacuation and search & rescue program has treated you, and what the best companies have to say.

Meanwhile, as I began my journey into this subject, and specifically my previous post listing Ten Things You Need To Know, I made an outdated assumption that the activities of private rescue services, and in particular Global Rescue, did not in fact conform to the basic claim of their advertising – namely worldwide medical transportation and evacuation. My claim was that they simply echoed the function of many private security companies by calling the police on your behalf when you get into trouble.

Traditionally this has certainly tended to be the case. In my early guiding career in Africa I observed frequently that frustrated families would be forced to take matters into their own hands and employ private helicopters as their preferred agency monitored the search for their loved ones behind the faltering efforts of the local authorities. In Kilimanjaro this is less of a danger thanks to the average group size and the limited likelihood of there ever being a bona fide search. In matters of rescue, however, the usual procedure has been for an agent of the outside medivac company to monitor local efforts and step in only when standards have sunk below a certain level.

Money for nothing you might say, and you would be right. However, to cut a long story short, no sooner had the post been published than a somewhat irate comment was logged on the site denying in the strongest terms the assertion that Global Rescue did not provide genuine and independent guarantees of rescue from Kilimanjaro. This led to a brief but extremely fruitful exchange between Global Rescue and I, for which I am grateful, and the results of which I would like to make public.

While I am not in the habit of offering free publicity for private organizations, what is available from Global Rescue will without doubt be of interest to serious climbers the world over, and indeed anybody who is contemplating an outfield adventure where the standards of emergency treatment and evacuation are questionable.

For Global Rescue members mountain rescue is available, not only from Kilimanjaro, but from mountains and wilderness terrain anywhere in the world. Successful rescues have been logged from locations as diverse Colca Canyon in Peru and Mount Everest. Members can rely on evacuation from anywhere they are – literally – to the hospital of their choice in their own country.

In the case of Kilimanjaro it must be understood that local search and rescue capacity is far from incompetent. Responsibility is divided between the individual operators and TANAPA. It is fair to assume that nothing will be gained by interfering in the work of the agency whose responsibility it is to conduct field search and rescue (TANAPA) if they are undertaking that responsibility to international standards. However it is in the instance of air evacuation when matters become less clear. Although rumors abound that a dedicated helicopter is being mooted for Kilimanjaro, currently TANAPA is reliant on private aircraft locally available on loan.

Notwithstanding their own use of similarly local resources in this regard, Global Rescue can, and will guarantee your prompt air evacuation off the mountain, and what is more they will guarantee any after care and medical transport that is required. None of this is a service to be regarded lightly when you are injured at the top of a mountain in arguably one of the most developing of all developing nations.

In the specific case of Kilimanjaro quite a number of the many climbers who annually attempt the summit are covered by Global Rescue. A Global Rescue paramedic was recently sent to the region for the purpose of identifying helicopter landing-zones at many locations on the mountain, and GPS readings were taken and logged. So far Global Rescue has not performed a high altitude rescue off Kilimanjaro, or at least not one using air evacuation. However the company is confident of its relationship with TANAPA, built on previous assistance offered during successful land rescues, and likewise confident of its local resources. The Company is arguably the first and most reliable line of defense in safety on Kilimanjaro, and for that matter anywhere.

Thanks to anglefoot for the gurney pic