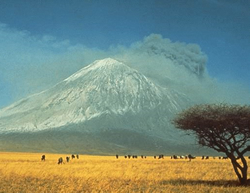 A handful of obvious activities spring to mind when one is contemplating a trip to Tanzania. Two of the most obvious are probably Mount Kilimanjaro and a combination of Serengeti National Park and the Ngorongoro Crater Reserve, all three of which owe their place in African mythology to their unique and undeniable appeal, which of course also helps to eclipse many other equally compelling possibilities very close at hand.

One of these is the Crater Highlands Trek that has recently begun to grow in popularity. This trip is less focused than Kilimanjaro and Mount Meru, since no summit forms the climax, and there is of course much to see and do on a daily basis in one of the most unusual human and natural landscapes on a continent replete with such things.

The Crater Highlands of Tanzania is usually associated almost entirely with Ngorongoro Crater itself, but in actual fact the reserve is much larger, and although its wildlife potential is largely concentrated in the Crater, a more diverse and subtle attraction exists in the wider landscape of the reserve. 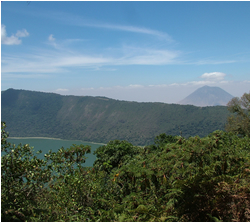 It would be difficult as a consequence to pinpoint a focus for the 10-day plus Crater Highlands Trek, but probably the itinerary would be diminished considerably if it did not include Ol Doinyo Lengai, one of the most rugged and spectacular features of an already extravagant landscape. Meaning Mountain of God in the language of the local Maasai, Lengai Crater is an active volcano that last recorded a significant eruption in 1966, with lesser eruptions in 2007 and 2008.

A number of smaller, sister craters also litter the landscape, giving the region its name, and making for a unique trekking environment that intermingles the distinctive culture of the Maasai with the land that their traditional existence depends upon.

This is a landscape of moulded volcanic peaks and rolling tropical highland countryside punctuated by lakes, streams and rivers. It exists in a state of grace, with a large human population, but with no development, and certainly do advanced tourist infrastructure to speak of.

The Ngorongoro Crater Highland Trek can be completed over the course of ten days, or can be broken up for smaller excursions of 1 to 3 days. Features of the trek include:

The Crater Highlands Trek is certainly a different way to see this part of Tanzania with its multi-layered cultural diversity and changing landscapes. The tropical highlands scenery, peppered with Maasai villages, and the day to day life of this pastoral people, is uniquely Africa, and uniquely Tanzania.

The trek is fully supported, with donkey portage and local guides provided a rich flavor of local knowledge, anecdotal insights and local history.