A Second Look at Giving Back to Kilimanjaro

There is a strong commercial incentive among the many climb and expedition outfitters aligned to Kilimanjaro to be seen to be active in the ‘give back’ phenomenon. This obviously paints those involved in a sympathetic light, and disguises a blunt commercial philanthropy with a warm and fuzzy image of non-profit. 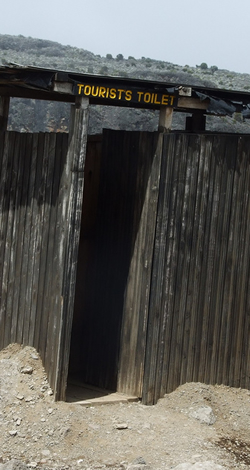 One of the most popular focus’ of this strategy has tended to be the local porters, who rightly or wrongly have a reputation for being downtrodden and abused. Naturally it is in their interests to maintain such a view of their existence, and as a consequence there is certainly no shortage of sympathy and support for this gregarious little sub-culture associated with the Kilimanjaro climb culture.

In fact there is a bit of a grumble underway in Tanzanian at the moment that no-one seems to lavish such care and attention on other disadvantaged working groups in Tanzania, such as mine or agricultural workers. Certainly this is true, but one must not forget that giving back to the porters is primarily a high profile marketing campaign to jostle for Fair Trade space in the market, and in fact the Kilimanjaro porters are such an amorphous and itinerant body of workers that you rarely see the same faces on the mountain twice.

However an interesting version of this was recently launched by Northwest Passage and Auram Safaris to utilize under-employed, or unemployed porters to clean up Kilimanjaro in the wake of the vast number of porters themselves who are usually responsible for the mess. The idea is to provide something more of a sustained and dependable work environment for older and irregularly engaged porters, of which there are in theory a good many.

In actual fact there exists several strata of porters. The vast majority are itinerate lowlanders working for climb agencies on a walk-in walk-out basis when they need the work, and these are usually the ragged men so patently ill prepared for expedition work. Then there are those aiming to slip into the mainstream guiding fraternity, and they tend to occupy the more direct support crew roles, and then of course those licensed guides who where once themselves porters and are now expedition leaders, and some business owners and climb entrepreneurs.

Where is TANAPA in all this?

The point of course is the mess on Kilimanjaro, which, bearing in mind the volume of climbers and associated personnel that make this climb annual, is reasonably limited. This is largely thanks to the efforts of the Tanzanian National Parks Authority (TANAPA), with very limited support from outside philanthropic efforts.

Why this is so is education. As with the efforts of Sebastian Chuwa in the preservation of the Kilimanjaro Forest, it is ultimately the local people themselves who will define the conservation direction of such natural wonders as Kilimanjaro, while brief and faddish foundations and initiatives put in place by commercial organizations do not, and cannot replace the long term strategies of the responsible government agencies. TANAPA’s Community Conservation Service Department (CSS) is at the forefront of this official education drive, mainly implemented by parks personnel at a grassroots level, and definitely lately being rewarded with a growing community awareness on the need and necessity fro long term conservation strategies.

So while it is not fair to say that external agencies glossing their image with Philanthropy Plus 45%, this should not imply in any way that they are stepping into an official vacuum. Far from it. Tanzanian National Parks Administration is highly effective by African standards, and although it enjoys support from minor commercial efforts, is not in any way dependent on them.