A journey along the Northern Circuit of Kilimanjaro… 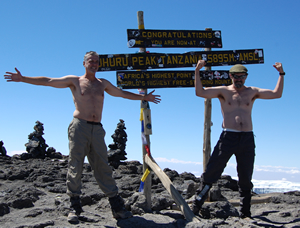 The quest for alternative routes on Kilimanjaro grows daily as the crush increases and more and more companies spring up offering new and unique climb packages. In reality there are few of these.

In most cases a handful of routes are used that cram the budget climbers along heavily trammeled trails and into littered and congested campsites. Kilimanjaro increasingly these days is becoming a venture travel machine.

I was very fortunate in Sept of 2009 to be invited on a little experimental climb to explore the seldom used Northern Circuit of Kilimanjaro. This turned out to be one of the rarest experiences on the mountain – five days of almost completed undisturbed hiking in a remote and unexpectedly beautiful quarter of the Kilimanjaro National Park.

Rongai and the Northern Circuit

Rongai is certainly back-end of Kilimanjaro, and with a complex entry arrangement and a long journey to the gate, it is not particularly popular with budget outfitters. This is the main drawback, but another is the fact that the scenic tableau is not quite as dramatic as on the more popular Southern Circuit. Another factor that weighs heavily against Rongai is that after a couple of days it links up with the Marangu Route at which point it becomes a zoo.

The Northern Circuit, however, peels off at about 2 o’clock and veers westward to circumnavigate Kibo Crater along it northern extremity. From that point we saw not another soul. Our group, three old climbing buddies and a last minute addition, enjoyed three nights at superbly located campsites entirely by ourselves. The clean campsites and narrow trails all attested to the fact that very few people make this particular journey.

The landscape of the Northern Circuit differs distinctly from the south It is drier, more moon-like and on occasions bleakly forbidding. To the north the countrysides diminishes through a slow progression of undulations towards the vast expanse of the Masai Steppe and Ambroseli and Tsavo National Parks in Kenya. Kibo Crater is ever present with almost no sign of the glaciers that overflow the southern slopes. Fields of paper dry everlasting daises are almost all can adapt to grow on these hostile boulder fields and lifeless plains of slate and dry stone. Water is hard to find and campsites are widely spaced. There is a deep and eerie silence everywhere that is broken abruptly as the trail swings suddenly southwards and we stumble into Moir Camp.

Here the trail from Shira to Lava Tower passes, and suddenly there are hundreds of porters like a huge flock of starlings moving forwards and back along a meter wide channel that is the trail. Lava Tower Camp has that all to familiar stink of human excrement and is crowded with tents, seething with porters and festooned with litter. Strangely it hardly matters. At this point our minds are focused less on the aesthetics than the hard business of altitude and fatigue, and the pending challenge of the Western Breach.

The summit experience begins at Lava Tower, and continues at Arrow Glacier just a few hundred meters and a kilometer or so distant. The Western Breach seems less than it is. Through the most all that is visible is a nearly perpendicular skree that is obscured by perspective. When we begin the climb it is a case of one step in front of the other. Pole-pole…the defining mantra of any meaningful Kilimanjaro climb. A few selected porter pass up and continue upwards towards Crater Camp. Seven hours of solid but unremarkable climbing see us over the lip of the crater and at the end of the Furtwangler Glacier.

At this altitude the sun shines, it is surprisingly warm and the porters, although a little less gregarious, are still joyfully exuberant. A few of them are collecting water from the glacier runoff and they congratulate us as we pass by on our way towards Crater Camp.

For me this was the only real disappointment of the expedition. Crater Camp was a shit-hole…see my article on The Beginning of the End of Crater Camp. It was a case of grin and bear the horror for the last few hundred meters to the summit, a little tomfoolery for the sake of photographs, and a scramble down to collapse in the sunshine and try and level the metabolism gasping at 19000ft…

We had big plans to explore the Ash Pit but as dawn broke on our penultimate day the temperature was horrifying and the lack of basic motivation at such altitudes had us directing our noses south and plunging down towards the more accommodating altitude of Mweka Camp….

In conclusion I would recommend Rongai Route to anyone. If you can afford a few dollars more, and do your homework to make sure you sign up with a good outfitter, it is the way to climb this beautiful mountain. Get in touch with me if you need any more info on this climb, or any other pointers in getting up and down Kilimanjaro…