Who Gives the Best Tips?

As expected, Americans usually give the best tips, and are most concerned about it, while climbing Kilimanjaro. The other “good tippers” are the Canadians, English, Australians, Kiwis, and perhaps the odd South African.

Conversly, known to be the worst tippers are the Germans, Russians, French and Tanzanians. Most likely, it’s just a cultural norm.
I once had an assistant guide tell me that he carried a German’s bag for 7 days up the mountain, and afterwards, he gave him $5. He was pretty upset, as many of them rely on the tip, more than what they are getting paid from the company. Some porters have been known to reject climbing the mountain with certain ethnic groups because they are such bad tippers. 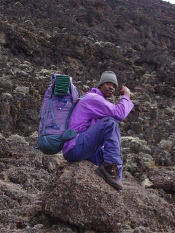 This porter looks like he is in deep thought. We think he is sizing up his tip .