Picture of the week 47 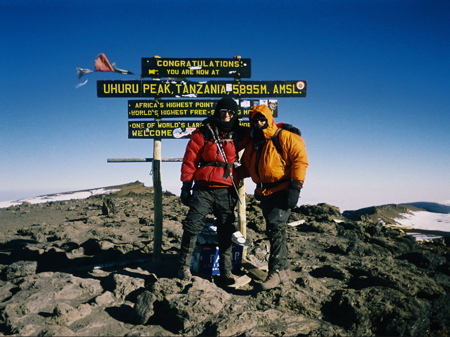 The stroll from the spot of the week 46 photo to the summit sign was maybe 150 yards. My son and I covered that distance, arm & arm, as I fondly recall and you would have thought we would be feeing triumphant, but the core feeling we experienced was one of over-powering relief.

We knew we didn’t have to climb anymore. Our mission had been accomplished even with the knowledge we had two more days to walk to the Land Rover. We hadn’t slept during our over-night at Crater Camp but we had almost no AMS symptoms other than the absence of hunger and nobody traditionally gets sick on the way down so we considered ourselves home free.

Everyone who sees this coveted photograph always asks, “How cold was it?”

Due to the altitude and lack of oxygen all I can say is that in the face of high 20’s and single digit windchill, “It was cold but we didn’t feel it”.