Picture of the week 18 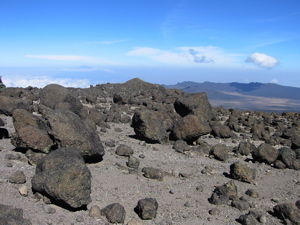 The 4 hour jaunt from Moir Camp to Lava Tower took us through topography where I fully expected to see the White Rabbit darting about. As we approached the intersection where the Lemosho, Machame and North Circuit routes converge, we found ourselves surrounded by this spectacular boulder field. I couldn’t immediately put my finger on why it looked so weird to me but slowly, enough oxygen crept in from the 14,300 ft. air to produce the answer. The boulders looked like they had just been rolled into place; none of them were weathered-in or half protruding. It was like standing on a gigantic pool table. I don’t recall saying anything to anyone else at the time, it was simply one or those “wow” moments and no, when we arrived at Lava tower, I didn’t find Alice.