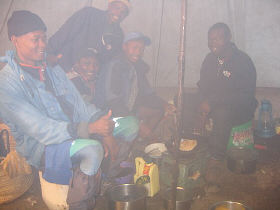 You would be surprised – except for the lunches – most of the breakfasts and dinners on Kilimanjaro can be better than expected. You often wonder how these guys pull off such amazing meals. Are you really hungry and anything tastes good? Or do these guys really know how to cook?

I would say, it’s a little bit of both.

If you ever get a chance and want some real lively action and to get “some culture”, wander over to the “Cook Tent” where you will hear a bunch of quasi-cooks, part-time porters preparing your meal – and it usually sounds like they are arguing or talking in the loud male dominant voice, all at the same time. Generally they are surprised to see you and don’t mind interacting with you now they have started to get to know you.

One word of caution: remember, you are not in a formal kitchen, hence there are not nice cutting boards, wonderful dishwashers and ample counter space. It’s more or less a couple buckets, some random cutting boards, which could be sitting on the ground, and food strewn around in baskets, mixed with a little bit of dirt, and set up in some random rudimentary fashion.

It’s works, though. And that’s the only thing that matters in Tanzania. It’s all good in the end, just don’t get all analytical about the handling of the food. You are in Africa – deal with it. That’s how all your food is handled pretty much anywhere in Tanzania, so either watch the process or pretend it’s actually meet some health department standards.