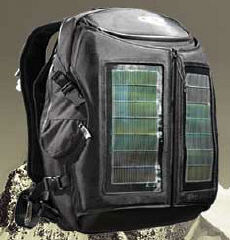 One of the biggest issues you face on Kilimanjaro is capturing all those spectacular moments with your camera. For the average Kilimanjaro climber, they are going to take pictures up Kili for about 7 days, turning their camera on, and then off, on and then off. Afterward, most people have a planned safari, which could take between 5 to 7 days. If you don’t have multiple batteries, or ones that can be recharged by the sun, you might have difficulty using your camera the entire length of the trip. That means – less pictures and generally you want more pictures in Tanzania than less.

One of the coolest things I have seen people do is to bring a solar backpack. You can actually use this solar backpack as your day-pack going up Kilimanjaro, while also charging your batteries. In our last big group trip up Kilimanjaro, we charged cell phones, computers and cameras. It was easy and we able to keep camera batteries from dying.

Not everyone wants to buy a solar backpack, so I would either bring 3 extra sets of batteries, or an adapter and plan when you can use it.