The beginning of the end of Crater Camp 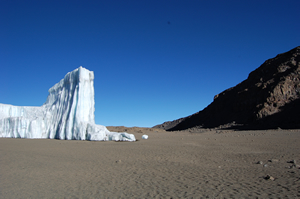 The current buzz in Kilimanjaro is the imminent closure of Crater Camp. I discovered this on my most recent trip when a few mates and I summited via the Western Breach and spent a long and ugly night at Crater Camp.

Crater Camp is touted as the last word in isolation on the slightly over-trammeled Kilimanjaro circuit. There is no doubt that getting up there, particularly via the famous Western Breach, is a large undertaking, and spending the night at over 5500m is not for lightweights, but isolated Crater Camp is not!

We made the trip up from Arrow Glacier Camp in about 7-hours of fairly solid slogging up the middle of the Western Breach. Scrambling over the edge of the crater the first sight that greets one is the rather diminutive – not much more than a huge ice-cube – Furtwangler Glacier. After the obligatory photograph against the ice mass – ‘say Fartwanker!’ – we trudged over the ash colored sand that lines the crater floor towards camp situated about 500 meters distant. As usual the porters had arrived before us and were setting up camp, and besides them we were alone on this beautiful and desolate spot.

However it was difficult to ignore a carpet of detritus littering the extremities of the camp, a collection of oddments including discarded tampons, teabags, hand-warmers and the usual debris associated with the human condition. I took my camera and set off to photograph the hidden piles of kitchen waste and portable toilet dumps that were the most obvious signs, but pretty soon I was reeling at the sheer volume of crap – literally – that littered the camp surrounds.

Behind every rock, and even some way up the trail towards the summit, hundred and hundreds of human turds lay un-decomposed as might be expected under these conditions of temperature and altitude. It was the most revolting sight imaginable in an otherwise pristinely beautiful natural space.

Basically the problem is this: It is ecologically unsound to dig pit latrines at this altitude thanks to the fact that no degeneration will take place and what is deposited will remain effectively forever. The use of portable toilets is the alternative, but few porters care to portage filled units down so they simply dump the contents onto the sand. Moreover the porters themselves have no facilities so have no choice but to defecate out in the open and it is this that accounts for the colossal amount of human waste in evidence everywhere.

The end of Crater Camp

As soon as I was back in Moshi I was on the phone to the local head of KINAPA who told me that the situation at Crater Camp had been of concern to the parks authority for some time, and that in fact the decision had recently been taken to shut the facility down altogether. This effectively means that any Western Breach Summit will end at Barafu Camp and that only by special license can anyone in future make use of the crater floor.

As far as current obligations are concerned, pre-existing bookings will be honored, but within a year the facility will be cleaned up and left to nature. It is a very sad fact that the state of human commerce on the mountain is so reckless and indifferent, but the fact remains. Although very sad it is probably for the best. So for those of you booked to climb via Crater Camp, hold your nose, watch your step and make the most of being the last of any of us to make the journey.