Lemosho is the longest of the outfield routes, and sometimes regarded as the second timers Kilimanjaro route, although it is also for anyone with an appetite for a quieter trail and a more remote atmosphere. Some would say that the beauty of the trail is a little less accessible than Machame, and certainly the rolling Shira Plateau that is one of the principal features of the trail adds an interesting texture quite as it allows for a more moderate process of acclimatization. Lemosho also has the added potential of big game sighting on the lower reaches, requiring sometimes that the first day be hiked in the company of an armed game scout.

The climb itself can take either 7 or 8 days, with 8 days being recommended in order that climbers have more opportunity to acclimate before the brutal summit day. This route is not nearly as popular as Machame or Maragnu, but it’s a good one to consider because the longer climbing time equals a greater chance of reaching the summit with fewer problems. 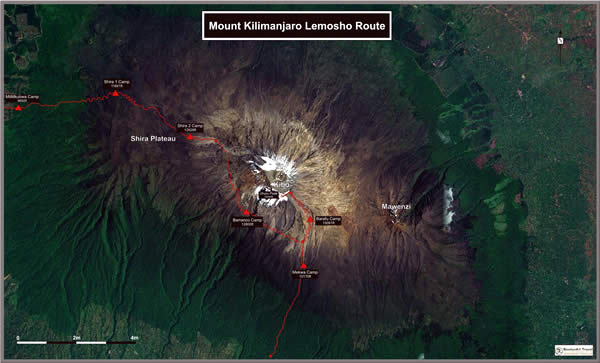 The Lemosho trailhead is situated well west of the other routes, but from day 4 onwards it merges with Machame and follows the same course from then on. And quite as most Machame groups descend on the separate Mweka Route, Lemosho groups typically do as well.

It takes about 3 hours to drive from Moshi to the official trailhead. Below is the normal 8-day itinerary, with a note about the 7-day version below:

After the morning drive to the trailhead you’ll spend the first day with an armed ranger due to the animal population in this forest area, stopping at the Mti Mkumbwa Camp after only about 3 hours of climbing.

This day starts in the forest and gets considerably steeper as you go through the heather and moorland areas before camping at the Shira Plateau in a large, open, and scenic area at the Shira One Camp.

This day takes you on a gentle walk across the plateau for some excellent scenery while your body continues to acclimatize.

NOTE: From Shira Two Camp on, this route is identical to Machame Route, including the descent on the separate Mweke Route. If you’ve taken Lemosho you’ve done another day at this point, so Day 4 of Lemosho is identical to Day 3 of Machame and so on.

The morning climb is somewhat steep on this day as you ascend to Lava Tower at 4,600 meters at midday before descending again on the scenic route to Barranco Camp. This is a great example of the climb high/sleep low rule that helps people acclimatize safely.

You climb the Great Barranco Wall, which looks more intimidating than it really is, and down into the Karanga Valley. This day has many ups and downs and crosses many small streams before crossing the Karanga River just before camp.

You climb through rocky and otherwise barren terrain on your way to Barafu Camp. The camp is in another cold and windy area, but you’ll only be sleeping from around 7 p.m. until 11: 30 p.m. or so because you’ll be starting the summit climb at midnight.

You’ll start at midnight with by far the most challenging 6-hour section of entire climb as you reach Stella Point around sunrise. After a short rest you’ll probably be walking in snow for the next two hours until you reach Uhuru Peak, AKA the summit! After enjoying the moment briefly you’ll begin your descent to the Mweka Camp back in the rain forest, which takes about 8 hours including a quick rest in the middle.

After the previous day you’ll deserve this short and very scenic descent of about 4 hours down to the Mweka Gate, where you’ll sign the register to make your climb official.

The 7-day version of Lemosho

You can do the Lemosho in 7 days instead of 8, and the only difference is days 2 and 3 on the 8-day climb are combined into one 8 to 9 hour climb from Mti Mkubwa to the Shira Two Camp. This extra day is obviously more challenging and it also cuts way down on the climbers’ acclimatization time, which can hurt the chances of reaching the summit with fewer problems.