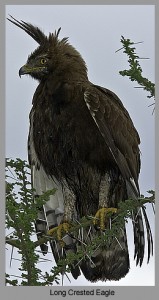 Perhaps the most fruitful and obvious bird watching available in the vicinity of Kilimanjaro will be in the gardens and grounds of your hotel and lodge. There you will get your first glimpse of the astonishing diversity of bird-life that enliven the sights and sounds of tropical Africa.

It will be during the lower reaches of the climb as the trail moves through the dense belt of cloud forest that this sense will be compounded by the range and volume of birdcalls emanating from the dark shadows. Some species will be obvious. A loud and visible canopy dweller is the Silvery-cheeked Hornbill that either lumbers from tree to tree, or migrates across the sky with its strange, animal like call. Others will be the Turaco, or Louries as they are known further south, that flash through the sunlit spaces with crimson underwings and a ringing call that seems to have been created in a Hollywood sound effects studio to complement a forest or jungle scene.

Other little flashes that might catch your eye could be one of the many varieties of iridescent sunbirds that occupy the forest fringes and sunlit glades, or paradise flycatchers darting to and fro to catch insects on the wing. Most of the forest bird life however is difficult to see, and were it not for the eloquence and volume of song, you might not even know that they are there. If you are very fortunate you might glimpse a Long Crested Eagle perched at the forest fringe, or a Gymogene with its floppy and uncoordinated flight pattern coursing the medium altitudes. Below is a truncated list of species found in and around the Kilimanjaro area, some of which you will undoubtedly see, but a good bird book and a par of binoculars, and plenty of patience are what are required to really get a sense of the diversity that this compacted ecosystem supports.

Beyond the line of forest life on all levels diminishes abruptly until at high altitude there are almost no living sights or sounds except your companions ahead and your own breathing. An ever-present escort on the climb will be a pair of White-collared Ravens, who, if you take the time to observe them, make of for in interest value for what they lack in glamour. They are highly aerial, with extraordinary powers of general-purpose flight, and with a propensity to play on the gusts and thermals in a way that few other birds do. Their intelligence is bountiful, and applied usually in finding ways to raid your pack if you ever make the mistake of leaving it in the open.

Other high altitude birds are the secretive Augar Buzzards the ply the cliffs and crannies, Steppe Eagles that might be visible at high altitude or the occasional Black Shouldered Kite in the moorland belt displaying the incredible aerial virtuosity that has won this little raptor its name. Look out for the Alpine Chat and the ubiquitous Cinnamon Breasted Rock Bunting, a grubby little birds with confiding habits that occupies the areas around the huts, camps and caves and has after much exposure to human commerce become very friendly, and quite demanding.